When I was in North Carolina this past month visiting family, I actually did a bit of my own cooking. Since I had my cousin Sarah there, who is a fellow cook and excellent photographer, I thought it would be great to do a co-blog post with her.  So we asked our grandmother Betty what she remembers eating as a child, and there was one thing that she recalled in particular. It was something her grandmother Sarah Cohen Elson (originally Elsass) made every Friday for Shabbat, called Schnecken, which I later learned is German for snails. While I would be happy to do a post on real snails at some point (yes, I love French snails, which everyone in France knows are just an excuse for consuming large amounts of herby butter with bread), these schnecken are a sweet pastry that are only in the shape of snails.

Sarah’s family was part of a wave of Jews who came to the US in the 1880s from Eastern Europe and Russia. She would be the last generation to keep a kosher home, since this was subsequently abandoned by my great-grandmother Fanny. So I have always thought of Sarah as my family’s link to a completely different way of life. We happen to have a couple of photos of her, my favorite of which is this gem. She is on the left.

I mentioned before that many Ashkenazi baked goods are filled with cinnamon and nuts, and Schnecken is in that same vein. Since my grandma has no record of Sarah’s recipe, we had to try to find one that might have resembled hers. So I went to the Jewish food authority Joan Nathan, who indeed discusses the history of this bread, along with that of rugelach, in her article A Tale of Two Treats:

While frankly Nathan’s article doesn’t clarify much of anything for me as far as the difference between rugelach and schnecken, (I always thought rugelach was more of a cookie, but I guess they are similar) she mentions a cookbook called the Settlement Cookbook that supposedly documents the history of these pastries. Amazingly, that very cookbook was in a pile of old cookbooks that I had just gone through the day before in my grandmother’s closet. I love old cookbooks, but this one has an especially interesting history. It was written by a woman named Lizzie Black Kander in 1910 as part of a project to help Jewish immigrant women assimilate into American culture. So while it is a documentation and celebration of early American Jewish classics, it also reveals a gentle nudging of immigrant women to modernize their domestic habits and adopt American ways. This is the kind of cultural history one finds in cookbooks that I find really fascinating. 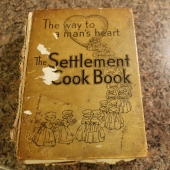 As Nathan indicates, there are multiple schnecken recipes in the book, most of which resemble cinnamon bun recipes.

We finally picked one that grandma approved of, and so, accompanied by my two Sarahs, I set out to recreate schnecken. We made a simple yeast dough enriched with butter and sugar, let it rise for a couple of hours, and then rolled out the dough on a cookie sheet. For our toppings, we chose brown sugar, cinnamon, and currants. Currents are especially nice to bake with since they are so petite. They integrate very well into the filling. You could just as well use raisins, though.

Here’s the recipe we picked:

For the Kuchen Dough:

Mix yeast and milk in a large bowl and set aside. Whisk the butter and sugar and add eggs one at a time in a separate bowl. Add this to the yeast bowl and stir to combine. Now add flour to this mixture until a dough forms. I usually stir with a spoon until the mixture becomes firmer, and then I begin kneading in the bowl to avoid mess. Once you have a smooth, but not too stiff dough, stop adding flour and knead, only adding a dusting of flour if necessary to avoid sticking. Knead with the heel of your hand, pulling the dough up and then pushing it down very firmly. After about 5-7 minutes, set aside in a warm place and cover with plastic. Allow to rise until doubled in bulk.

Roll dough into 1/4 inch thickness on a cookie sheet. Paint with melted butter and then sprinkle with a generous amount of sugar, raisins, and cinnamon.

After laying out all the fillings, we rolled:

Finally, we cut the dough in slices and laid them side by side in a roasting pan. Allow them to rise again until they look puffed up.

Then brush with butter and sprinkle with cinnamon sugar. Bake for about 20 minutes at 400 or until golden brown and fragrant.

In the final assessment, Grandma said that ours were not as sweet as her grandmother Sarah’s schnecken, but that they were darn good. If you wanted, you could always glaze them with a powder sugar/butter mixture and that would be delish.

Not surprisingly, these went over well with the little guy, and I even caught him making off with one he found in my backpack on the evening we returned to Chicago. So sneaky!