Even though I have recently sought out sunnier skies, I still follow the winter weather around the country with great compassion. And there has been no lack of it recently. So I decided that, in honor of Chiberia, the new name given to the apocalyptic cold and snow Chicago has been getting of late, I would try to reconnect a bit with my Russian roots. While I have Russian ancestors on both sides of the family, Russian traditions have never played a part in my family’s culture. On my mom’s side, the old country is a bit far back to remember; my grandma’s grandparents came, I believe, from a place called Kovno, actually part of Lithuania today. And on my dad’s side, my grandmother came from Vinnytsia, Ukraine as a child, but never passed on a great deal of her native culture. My dad does remember a sweet plum jam called povidl that was kept in large container in the attic and dipped into all winter, to be spread over bread. And while his mother loved borscht, he rebelliously passed on the ingrained belief that borscht was a food to be shunned and reviled, which I’ve come to re-evaluate since I happen to like beets. But neither the plum jam nor the borscht recipes were ever passed on to me.

When I was a child, we reconnected somewhat with Russia through a lovely family that we got to know by way of a Jewish program connecting Americans with new Russian immigrants. This was all part of the ‘Free Soviet Jewry’ movement in the 1980s, bolstered by Gorbachev’s glasnost policies, which made it much easier for Soviet citizens to emigrate. Since we are still in touch with this family, I recently asked one of them, our friend Svetlana, about dishes that her family enjoyed and that reminded her of Russia. She gave me some great ideas.

One of the recipes I took from her is one she says was her children’s all-time favorite food. It’s called Vareniki, and is similar to a gnocchi. She has memories of rolling out the dough and making the dumplings with her kids, a project they always loved. It was a hit in our house too! Here’s my adaptation. I used whipped cream cheese instead of the more traditional farmer’s cheese and it was delicious.

I also recently happened to be reading Anya Von Bremzen’s memoir Mastering the Art of Soviet Cooking, which gives readers a vivid portrait of life in the Soviet Union through the story of her mother’s family, and with frequent references to the foods, both real and fantasized, that defined Soviet life. There was some overlap in the recipes I was finding in various sources, dishes that were iconic home food of the Soviet period. One staple was Kotleti, (like cutlets) a mixture of seasoned, minced fish, chicken, or beef that is then pan fried. I offer two recipes for kotleti, one that I adapted and one from a book Bremzen refers to called the Book of Tasty and Healthy Food, by Anastas Mikoyan. Mikoyan was a statesman whose career astonishingly stretched from Bolshevism to Brezhnev, and who was very involved in the modernization and improvement of Soviet food. The robust and iconic book catalogues simple Russian cooking, and is peppered with images that capture the Soviet esthetic as it related to food: hard work that was rewarded with great abundance. If you’re interested in culinary history, this book is definitely worth a look. It is an interesting example of how ideals and values get transmitted through food and recipes. Some notable aspects of the imagery includes page after page of drawings of canned food (showing off the full range of ‘modern’ Russian products), and idealized images of agriculture. Here are a couple of examples: 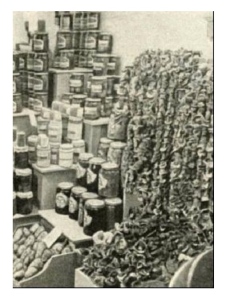 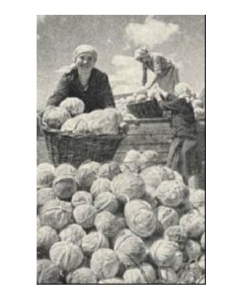 The book is full of great pictures! So that brings me to cabbage, which I love, and which I think is undervalued in the US. While the Irish colcannon is usually my go-to cabbage dinner, this one for Ukrainian braised cabbage is quickly becoming a family favorite. The creamy ketchup sauce here puts a different spin on things. It is simple but comforting, and the combination of flavors works very well. I got this recipe (and made just a few small changes) from blogger Natasha at Natasha’s Kitchen, who calls it “a classic comfort food made in nearly every Russian or Ukrainian home.” I left out the pork and simply added the cabbage directly after the onion and carrots, but you could keep that in if you choose. I also recommend letting the cabbage brown a little on the edges before you finish cooking. This boosts the flavor just a bit. 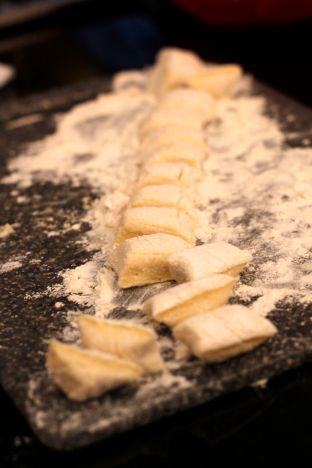 Mix the cheese, egg and sugar until well blended. Add flour and mix. Additional flour may be needed to achieve a soft dough. Be sure not to add too much flour, however, or the dumplings will be tough. Roll dough into ‘snakes’ about 3/4 inch wide. Cut with a knife, until all the dough has been formed into little pillows about 1 inch long. Boil the dumplings in plenty of water until they float to the surface, and then remove with a slotted spoon onto a plate.

For extra flavor, heat a nonstick frying pan and add a thin layer of butter. Fry the cooked dumplings until golden and transfer to a plate.

Finally, wipe out the pan and add the cherries, sugar, and cornstarch, dissolved in a bit of water. When the cherries begin to bubble, transfer to a serving dish and serve with the vareniki.

Mix all of the ingredients except butter and flour in a bowl. With wet hands, form the mixture into oval shaped patties, or whatever shape you prefer. Meanwhile, heat butter in a nonstick pan until bubbly. Dust patties with flour, shake off excess, and lay in the pan without crowding. Cook on both sides until golden brown. 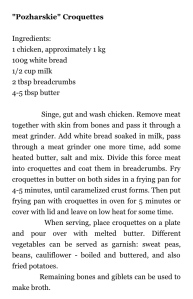 Home-style Russian Braised Cabbage (Thanks to Natasha from http://www.natashaskitchen.com):

1. Shred the cabbage into thin slices using a mandolin or by cutting it in half or into quarters  then finely shredding each piece with the flat end of the cabbage against the counter. Place sliced cabbage into a large mixing bowl. Sprinkle 1 tsp of salt on the cabbage and scrunch the cabbage using both hands for 30 sec to soften it.

2. Dice the onion and grate both carrots. Preheat a large skillet or dutch oven over medium-high heat. Add 2 Tbsp of olive oil. Saute onions and carrots for 5 min, mixing frequently. When almost done, mix in 2 tbsp of sour cream. Empty contents of the skillet into mixing bowl with the cabbage.

3. Cut pork into small cubes. Using the same skillet, add 2 Tbsp of olive oil and cook pork for 5 min over medium-high heat, stirring occasionally. When cooked through, add it to the mixing bowl with cabbage, carrots and onion.

5. Add 2 Tbsp of olive oil to large skillet or dutch oven. And cabbage mixture  and set the heat to medium. Add 2 bay leaves. 6. Cover and cook cabbage for 35-40 min, stirring every 15 min. Reduce temperature to medium-low after 20 min. Add more ketchup or salt to taste, if desired. Remove bay leaves before serving.