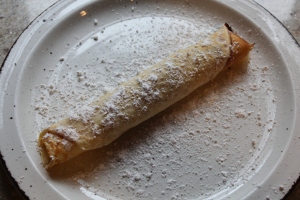 When I think of Saturday mornings as a kid, one thing immediately comes to mind. We creatively called them Rolled-Up Pancakes, although I later found out that they were known to the rest of the world as crêpes. Rolled-Up Pancakes have a special way of being served, though, and that is spread with jam, rolled, and sprinkled with confectioner’s sugar. My mom says that the original recipe for these actually came from my grandma’s copy of the Settlement Cookbook, which I talked about in another post. My grandma often made them with lemon juice but we always went with jam.

On a recent trip to Pittsburgh, we made these and shared them with Damien for the first time, in the very same house where I spent much of my childhood. I have to admit that I like a little nostalgia when I travel to visit family, and it isn’t hard in Pittsburgh since I left when I was 18 and have few recent experiences there to replace the old memories. My room at home doesn’t change much, and I prefer to keep it that way. I like to preserve all the layers and eras that make up my life. Since my parents haven’t moved, coming back to town means I get to look through my old drawers, see how my old elementary school has changed, and visit the hidden spot under a shady oak tree where my friend Emily and I exchanged halves of a best friend necklace. Even if that friendship, or any other that I was sure would last forever, actually ended with hard feelings in junior high, I see no reason to disparage the person I was by besmirching someone who brought me joy in the past. I prefer to think of us at our best, and remember the good things people brought to my life when they were there. So I rarely take down pictures of former friends or even ex-boyfriends, like my college best friend and first boyfriend Ben, who tragically went on to commit suicide several years ago. When I go back to Pittsburgh, these people, and others whom I still talk to, although not nearly enough, feel closer than ever.

So while, as John Steinbeck discovered in Travels With Charley, you can’t really go home again, and often our memories are tinted pink, I don’t think nostalgia is all bad. I liked an article in the New York Times this summer about a study on nostalgia and its surprising benefits. The study argued that feelings of nostalgia (not to be confused with cynicism or reactionary attitudes) gave people a sense of belonging and meaning. “After a decade of study, nostalgia isn’t what it used to be — it’s looking a lot better. Nostalgia has been shown to counteract loneliness, boredom and anxiety. It makes people more generous to strangers and more tolerant of outsiders. Couples feel closer and look happier when they’re sharing nostalgic memories. On cold days, or in cold rooms, people use nostalgia to literally feel warmer…” (Article, by John Tierney, was entitled “What is Nostalgia good for? Quite a bit, research shows,” July 8, 2013) I think nostalgia, when used positively, has the potential to help us to gain perspective on our lives and to think about the world in a more positive way. For me, this means keeping up traditions that just might create the stuff of future nostalgia, and trying not to ignore the seemingly trivial aesthetics of everyday life. What will our kids remember from their childhood? 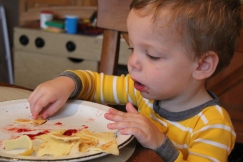 Mix all ingredients with a fork or whisk until blended. 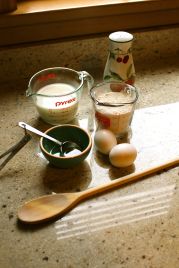 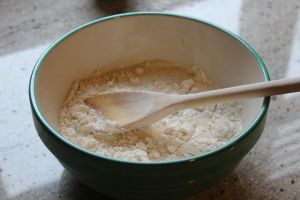 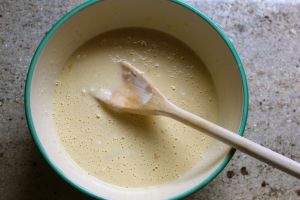 Heat a large non-stick pan and grease lightly. Pour a ladle-full of the batter into the pan, spreading it immediately to make a large round crêpe. 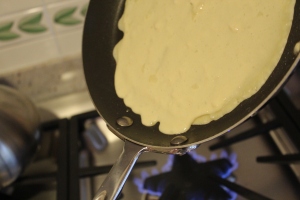 Flip and brown on the other side. Stack pancakes up on a large plate until ready to serve. To serve the traditional way, spread with jam, roll, and sprinkle with confectioner’s sugar. 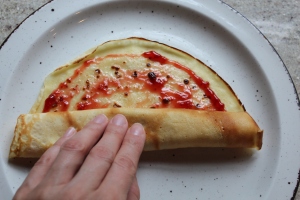 One thought on “Rolled-Up Pancakes”