Last night I had dinner with my brother Jake’s family. My sister in law’s parents are in town and they invited me for a Syrian dinner, which her dad (who is Syrian) often makes when they get together. They start by going to the Arab markets on Kedzie, and buying an array of products, many of which are imported from Syria: They buy fresh pita, labne yogurt, spices, produce, meats, cookies, cardomom-scented coffee, and any number of other goodies to get their time together off to a good start.

So after, according to my brother, a robust exchange in Arabic over the situation in Syria (Jake was certain that they were about to exchange punches, but apparently it was just a friendly chat, Arab-style) they returned to the house. With all this beautiful produce and meat, I asked Suzanne’s father Hisham to make me something that reminds him of his childhood in Syria. He told me about a simple dish that his mother would assemble at home and then take to the local baker to be baked in a large oven. The dish was simply called meat in the oven, and involves setting a layer of seasoned groung beef on a bed of finely chopped vegetables. It is quite similar to ratatouille, but the vegetables are diced finely, giving a different texture and feel to the dish.

The store that they went to, called Al Kayyam happens to have an oven that is very similar to the ones people would bring their items to in Syria, and here is a picture of it, and Hisham:

We made ours at home, but I imagine baking in an oven like that would add a special something that home ovens can’t!

The seven spice blend called for in the recipe is a traditional combination of spices that are used in Middle Eastern cooking. I believe it includes coriander, cumin, paprika, as well as some of the sweet spices such as cinnamon and clove. I know of another spice blend from North Africa called Ras El-Hanout which is probably very similar. If you can’t find a Middle Eastern spice blend, you could use any spices that you like.

Cut the vegetables into a small dice.

Mix the vegetables together in an ovenproof dish. Next, mix the spices and salt into the ground beef and massage in with your hands. Flatten round pieces of meat to about 1/4 inch thickness and lay evenly over the vegetables.

Bake in a 400 degree oven until beginning to brown. Turn the everything a bit and continue baking until nicely browned, about 30-40 minutes total. 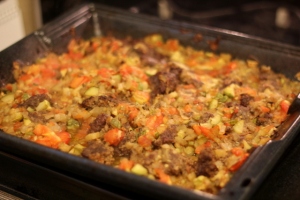 For our dinner, we served this with freshly baked pita bread, a plate of cut vegetables, and a swig of olive oil. The plate of fresh raw vegetables seems to be a common accompaniment to meals in the Middle East, and I think it’s a wonderful tradition. Here, we cut peppery radishes, mild chile peppers, baby cucumbers and pomegranates and just sat them on the table to nibble on before and during the meal.

Such a satisfying and simple meal that the whole family can enjoy!