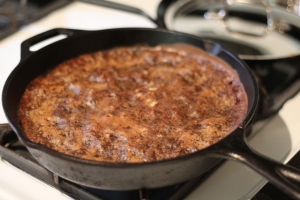 When I was growing up, we often went to Max and Erma’s, a Pittsburgh restaurant that is part diner and part TGIFridays but with better food. Strangely though, aside from the buffalo chicken sandwich, which I still love, I barely remember the entrées, but what sticks out in my mind are the desserts. Oh the desserts… They had an excellent version of all of my favorite American classics: Hot apple pie, Warm brownie à la mode, and Kentucky pie, sometimes called Kentucky Derby pie.

Perhaps you are not familiar with Kentucky pie. It is an obscene combination of brown sugar, butter, cream, pecans and chocolate, and is absurdly delicious. It reminds me of some of the cooking show chefs who tell us, “I have an amazing secret recipe that I am going to share with you: Add 2 lbs of butter to 2 cups of sugar, add some heavy cream, and top with chocolate chips.” Duhh… you don’t have to go to the cordon bleu to know that that will taste good. It’s almost cheating. And yet certain occasions simply call for putting all those things together and baking at 350. So here’s one to try if you’re in that kind of a mood. It’s a gooey sugary concoction with a crunchy, caramelized surface, similar to pecan pie, but without the focus on pecans (although I actually like to add pecans). I had never actually attempted to make this pie at home, but decided that now was as good a time as any to start. So I set out to find a recipe.

I found one in a book from 1939 called Southern Cookbook: 322 Old Dixie Recipes, by Lillie Lustig, S. Claire Sondheim, and Sarah Rensel. I have been collecting antique cookbooks for a while, and I happen to be browsing this one recently when I came across this recipe. I love Southern cooking, and the rich past that it evokes, and I’m also fascinated by nostalgic representations and what they reveal about a culture. This book satisfies both of these interests. All the wonderful classic Southern recipes are represented here, along with storybook-style drawings of the Old South – 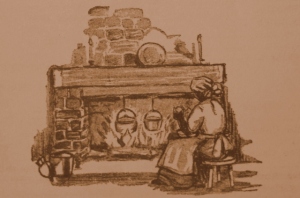 – including some of black people engaged in hard labor, which I suppose are also meant to be nostalgic… I guess one man’s nostalgia is another man’s nightmare.

And it doesn’t stop there. The introduction tells us that,

“Most of the recipes in this book were gathered from [southern city folks] though they undoubtedly in many cases owe their origin to the colored mammies who rarely bothered to write down their recipes…for they were good cooks who most often could neither read nor write…didn’t have to…you just put ’em in front of a stove with the fixin’s and they created somethin’ grand…even if they could couldn’t always ‘splain you jus’ how.”

But before you yell about the South, this book was published in Pennsylvania! In any case, southern cooking is an incredible melting pot, and undoubtedly owes some of its roots to the cooking of African slaves. And this book has a lot of promising recipes in it in spite of its questionable imagery, and one I found was a recipe for Kentucky pie. I gave it a try and it didn’t disappoint. My only changes were to reduce the amount of filling a bit and sprinkle pecans and chocolate chips over the top. That’s the way I remember eating it, so I made those additions.

Cream the butter, eggs, sugar, salt and vanilla until fluffy.

Pour into a prepared pie crust. I highly recommend a homemade one- so much more delicious and no sketchy fats, and they really aren’t hard to put together. Smooth out the surface and top with chopped pecans and chocolate chips. Press them in slightly and bake at 350 for about 30 minutes.

The mixture will remain like a bubbly liquid even when done, so go by the deep golden color. Caramelization is essential to achieve the full flavor. Serve slightly warm. Mmm. I remember why it was one of my favorites.

It doesn’t actually get an A+ on presentation. The surface looked a little funny and don’t even try to cut it until its cool if you want it to slice up reasonably neatly. But anyone who says it’s not good should not be trusted.

Update: During the course of the writing of this post, my son managed to rip off the cover of this $45 antique. I guess it’s worth a bit less now.