These are a fun and delicious way to use up leftover veggies in your fridge, and they make use of my favorite underrated vegetable, cabbage. I was inspired by something I saw in a beautiful Korean movie I watched recently called Little Forest. In the movie, the main character, a young woman from a small rural town, returns home to her village after a failed attempt at a city career and finds her single mother gone. Lonely at first, she tends to her physical and spiritual wellbeing in the kitchen, simply at first, and then finding herself immersed in the dishes of her childhood. One of the dishes she makes is this cabbage cake. Shredded cabbage and other vegetables are mixed into a savory pancake batter and topped off with a tangy mayo. If you can find the Japanese mayo called Kewpie,  pick up a bottle and give it a try. It’s a bit different from American mayo in texture and flavor, and works great on this.

The recipes I found upon researching this dish went by the Japanese name Okonomiyaki, which, it turns out, is a popular Japanese street food. Traditionally, dashi, a fish-based broth used in Japanese cooking, is used as the broth, but other broths work well too.  The toppings are every bit as important as the pancake, so don’t leave them out. The classic toppings are mayo, a sweet brown sauce made from ketchup, Worcestershire sauce, oyster sauce and honey, and another Japanese fish product called bonito flakes.  I’ve enjoyed it with mayo, scallions, and sesame seeds on top. 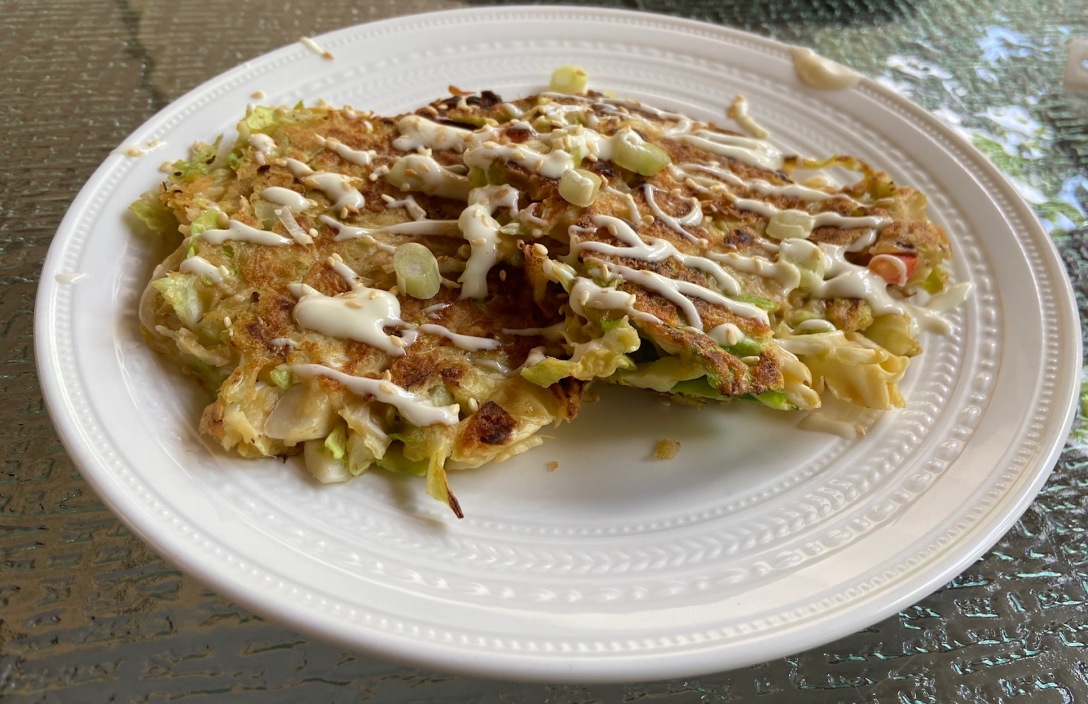 In a medium bowl, salt the cabbage lightly and massage briefly to reduce the volume. Add other vegetables, egg, broth, flour, and oil and mix well. Heat a frying pan over medium heat. Generously coat the bottom with oil of choice and pile approximately 1/2 cup of the mixture in the pan for each pancake. Flip when brown and then press slightly with a spatula to cook through. Serve with toppings.