Please check out my first podcast, part of a recent appearance on DocSmo.com!! DocSmo.com is the website of Charlotte, NC pediatrician and children’s health blogger Dr. Paul Smolen.  Here is the link:

For a summary, read on:

DocSmo and I teamed up to give you a special post about a topic that is very important for new parents and parents of small children. There is new research about the introduction of allergenic foods, in particular peanuts, to babies, and today we are going to go over what this means for you, and then finish up with a great recipe.

You may be aware that peanut and tree nut allergies have become much more common in recent years, and it’s not entirely understood why this is the case. Since 2000, AAP has been recommending to hold off on allergenic foods, particularly for kids who are considered “at risk.” In the meantime, allergies have continued to rise astronomically. By 2008, we start to see signs that the thinking was changing, and one of the people who led to this change was a doctor in London, Gideon Lack, who compared rates of allergy among Jewish children in London and Israel. It turned out that the rates were much lower in Israel than London among the same population. Dr. Lack happened to know that there is a product that is extremely popular in Israel called Bamba, which is essentially a little puffed corn snack with peanut powder on it. Dr. Lack wondered if it was possible that Bamba was to thank for the lower rates of peanut allergy in Israel, but he was still skeptical. Bamba:

So he constructed a 5 year study. After eliminating only the most peanut-sensitive babies for safety, he measured reaction to peanut protein at the beginning of the 5 years and then split the babies into two groups. Parents in the first group were told to feed them peanut snacks — either Bamba or peanut butter — three times a week. Parents in the second group were told to avoid peanut products for their babies. To his amazement, after 5 years, the kids who ate peanut snacks on a regular basis were far less likely to be allergic to them than the group that didn’t.

This led to a new study that was recently published in the New England Journal of Medicine (see reference below) that found that among children at high risk for getting peanut allergies, eating peanut snacks by 11 months of age and continuing to eat them at least three times a week until age 5 cut their chances of becoming allergic by more than 80% compared to kids who avoided peanuts. Overall, about 3% of kids who ate peanut butter or peanut snacks before their first birthday got an allergy, compared to about 17% of kids who didn’t eat them.

So now I will ask Doc Smo to join us and shed some light on the impact of this study. Welcome, Doc Smo!

Doc Smo: Thanks, Charlotte! Good to be here!

My question for you is as follows. Why is there still confusion in recommendations? It seems like there is still an emphasis on risk over the benefits of not worrying about risk. I found it interesting that many websites persist in emphasizing caution, even after quoting the results of this very study.

Just as an example, there is an article discussing this study that I read that ended by saying, “Sicherer and other experts say parents shouldn’t be tempted to start feeding their babies foods that have peanuts in them, particularly if the child is at high risk of allergies or they have a parent with allergies.” Say what?

I think when parents read this, they may be tempted to avoid the perceived risk and still see holding off as the safest option. I’m assuming this has to do with liability and hesitation to advocate for anything that could carry any risk? Or do you really think that most parents need to treat introduction of allergenic foods to babies as some kind of high wire act? Do we need medical tests and a doctor’s supervision before giving them peanut products or even other allergenic foods for that matter?

Doc Smo: That’s a great question. There is still more research to be done, but for children at low risk of allergy, meaning they have not already been diagnosed with severe allergies, the cavalier approach is probably going to be fine. For children at higher risk, meaning they have severe eczema or other food allergies, it may be a good idea to work with a pediatrician or an allergist while introducing peanut protein to your baby. But what this study does show us is that this is not an issue that you should ignore. If you don’t begin introducing peanut and perhaps other allergenic foods, between 4 and 11 months, you may be increasing your child’s chance of having a lifelong allergy.

You can speak to your doctor if you are concerned, but wisdom from around the world would seem to suggest that early introduction of peanuts is a good idea! And remember, you need to give peanut products three times a week in order to get the full benefit. So if you do choose this route, I have a few ideas for you. In the recent study, a simple approach was taken in which they dissolved a teaspoon of peanut butter into milk or formula, and gave the babies this nutritious drink.

Next of course there is Bamba, the Israeli product we discussed above, made by the Israeli company Osem. You can sometimes find it in the international or kosher area of the grocery store. It is a simple, melt-in your mouth puffed peanut snack, with nothing but peanuts, corn, oil, and a very little bit of salt. Really a great snack for babies! If you can’t find Bamba, try buying the peanut powder products that you now see in stores and sprinkling it over cheerios or other snack you give your baby.

Another recipe that I found was from Africa, where peanuts are very common in a variety of recipes. Porridges are a popular breakfast food in a number of African countries, and sometimes peanuts are added to these hot cereals. A peanut porridge is especially popular in Jamaica, where sweetened condensed milk makes it a sweet treat. The breakfast variety popular in Africa makes a more baby friendly meal, as it is a simple combination of grain, ground peanuts, and milk.

Here is my version of a peanut cereal that is made with Jasmine rice, raw peanuts (available in the bulk section at some grocery stores or at Whole Foods), and evaporated milk. (Note: evaporated milk is generally considered to be safe for babies, but do check with your doctor before using it.) I think this recipe would be fantastic for babies. Note that raw peanuts have a different, beanier flavor than roasted peanuts. This cereal has a very subtle nutty and aromatic flavor with just a hint of sweetness. The jasmine rice combines beautifully with the peanuts, and so I do recommend sticking with this variety. I personally think it’s yummy and quite like eating it myself!

Thanks for joining me on my first podcast and don’t forget to subscribe! I would love to hear any comments or ideas you have for giving peanut products to babies and young children!

Put the water (or 1 cup water and 1 cup of milk if not using evaporated) in a medium saucepan and put on the stove to boil. In the meantime, place the first other ingredients in a smoothie blender and grind for a full minute. Once the water is boiling, add the smooth rice mixture to the water and stir vigorously. Once the mixture returns to a boil, put a lid on the pot, reduce the heat to low, and simmer for 10-12 minutes, continuing to stir every few minutes. Remove the pot from the heat and keep the lid on, removing it periodically to stir vigorously as the mixture cools to avoid lumps. 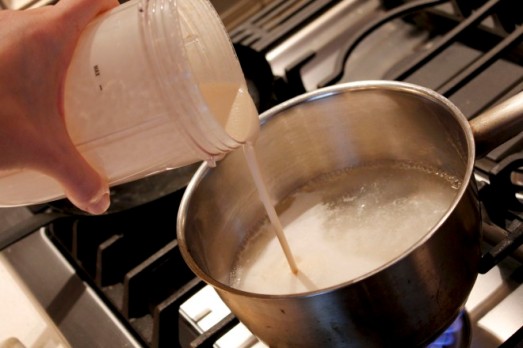