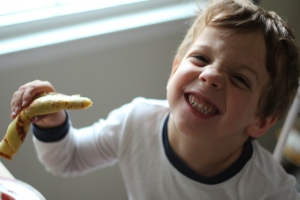 I wanted to re-post about a cool trick I came up with that has become one of my go-to breakfasts, even on hurried school mornings. And that is the Pancakelette, or what has now become more of a crêpelette, which is my way of getting an egg into my non-egg-loving kiddo. Rather than following the pancake batter instructions, I took an egg and put in just enough mix (and milk or oil, per instructions) to make a loose, eggy batter. Once cooked, the child in question thinks he or she is eating a pancake, when in fact they are eating a fried egg in disguise. Very tricky, I know.

I have since found that a much easier and quicker way to cook the pancake is to make it very thin like a crepe.  The mixture will still take a bit longer than a flour-heavy mixture to cook, but it turns over with no problem and is done within 3 or 4 minutes. When I do it this way, I do not use pancake mix, because it has leaveners in it, and would make it puff up, but rather just use a little flour. So here is my updated low-flour pancake, that takes a total of about 10 minutes to make. I don’t actually measure, so these are just approximations!

Pre-heat a crêpe pan or a large non-stick pan. In a small bowl, crack egg, and add to it the other ingredients. Blend well. Mixture should have some batter-y substance but still be a little jiggly, like eggs.

Coat the pan with a layer of oil or butter, wiping it down slightly with a paper towel (this will ensure the batter spreads evenly). Pour the batter into the pan and tip to spread thinly all around. Once the edges start to fold up slightly, flip and cook the other side. Press down to keep flat shape.

Remove from pan and spread with butter and jelly or top with a sprinkling of cinnamon sugar, then roll or fold the crêpe. 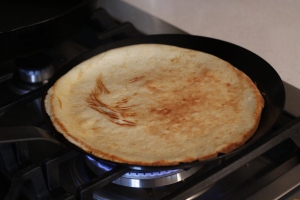 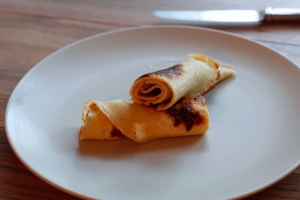