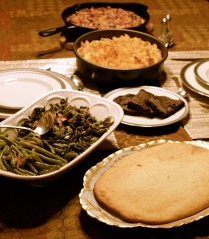 This Thanksgiving, I wanted to delve into African American culinary traditions and try to create a Thanksgiving meal that would reflect aspects of this history. I am ashamed to admit that I learned, on a fascinating blog called Afroculinaria, that Abraham Lincoln’s official declaration of Thanksgiving as a national American holiday fell mere months after his Emancipation Proclamation, and was largely intended as a way to bring a moment of calm to a country in flames. And while there is historically a separate holiday celebrating Emancipation, Thanksgiving is indeed historically connected to this period.

It turns out that in preparing for this meal, I waded much deeper into the subject than I initially thought. I’ve mentioned before that my mother’s family is from Atlanta (which is also where I went to college) and so I have a special interest in the South. I also happen to think it is home to one of the few great American culinary traditions, and one that is heavily influenced by African and African American foodways.

Soul food, a term often used to describe the African American culinary traditions, can be thought of as the result of a unique convergence of cultures and influences. Jessica B. Harris calls the African American people “a cobbled-together admixture of Africa, Europe, and the Americas,” and their food indeed reflects this eclectic identity.  We see indigenous American crops married with English, West African, and Native American influences- Cornmeal, sweet potatoes, legumes, greens, extensive use of smoked pork odds and ends for flavoring vegetables, and molasses are all foods that are all crucial to this diet. 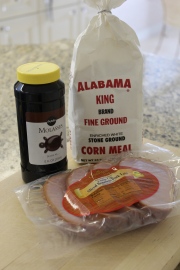 And if you think about it, many of the dishes that we associate with Thanksgiving in particular come from the soul food tradition, which is not surprising since it is one of the most authentically American cuisines.  Green bean casserole, sweet potato pie, cornbread, these are all things that go equally well on the Thanksgiving table as on the Soul Food Table. Of course, many of these have become associated more generally with Southern cuisine, but there are good reasons for this.

For one, blacks were responsible for an enormous amount of the cooking labor throughout Southern history, both as slaves and subsequently as domestic workers, and thus influenced the tastes of people far beyond their own families. Even people like my mother who grew up in 1950s Georgia, spent their childhood eating foods prepared by an African American employee. For the housekeeper, this was their workplace, but for the children it was the smells and tastes of childhood. The Encyclopedia of African American History also points out that in the difficult years after the Civil War, impoverished whites turned to African American culinary knowledge in order to learn ways of cooking under grim economic conditions. So soul food essentially became the cuisine of the South as well as allowing a “multi-ethnic slave population to forge an African American culture.” (Charles Lumpkins)

In my family, we have several recipes that came from my grandparents’ live-in housekeeper named Hattie B. Jones, who is an ever-present figure in my family’s past. She lived with them for many years and actually made the move with my grandparents from Georgia to New Jersey when my mom was just a child.  I wish I knew more about her, but I do have several of her hand-written recipes which were passed down to me. In particular, everyone has memories of her cornbread, which I am told was baked in a thin layer on a cookie sheet, so it came out golden and crunchy. I knew this would be going on my Thanksgiving table.

As I planned the rest of my menu, I pulled from a variety of sources and put together something truly delectable. Here are some of the sources I looked at:

The more I read and wrote, however, the more I realized I was straying too far from Thanksgiving, and so I will save a more extensive look at these fascinating books for a later post. For now, I will just tell you about the recipes. I decided to keep it classic and Southern, even though, as Cleora’s Kitchens shows, African American cuisine is every bit as diverse as America itself. But Thanksgiving is all about tradition, and so these are the ones I chose.

I recently learned that Macaroni and Cheese is a staple on the Thanksgiving table of many African Americans. It is part of the classic Thanksgiving menu proposed by the Family Reunion cookbook, and it even got a state sanction when Condoleezza Rice declared it her favorite part of Thanksgiving in an interview with journalist Kristi Watts from Christian Broadcasting. Pat Robertson, on discussing this interview in another segment with Watts, subtly asks her, “What is this mac and cheese, is it a black thing??” So it is, Pat, so it is.

Cook pasta until just barely cooked. Drain and allow to cool slightly. Add the rest of the ingredients except paprika and blend well. Sprinkle top with paprika and bake at 350 until brown and bubbly, about 45 minutes.

‘Sweet Potato Pie the Slavery Way’ (thanks to Michael Twitty from Afroculinaria.com) 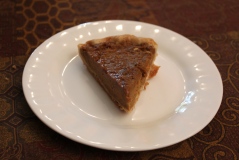 Twitty, an historian specializing in African American foods, talks in his blog about how the modern version of sweet potato pie, with sugar, cinnamon, and vanilla, would not have been within reach for most slaves. He offers a version that might have been closer to what they would have made, using rum as a flavoring and molasses as a sweetener. Luckily, I have a friend from Martinique who keeps me well-supplied with authentic Martinican Rum. Just a warning regarding the molasses- said Martinican friend passed me an unused jar of Blackstrap molasses recently, which I wanted to use in this recipe. It turns out that Blackstrap molasses is VERY strong and bitter and I would not recommend using it in such large quantities. If that’s all you have, use around ½ cup (or less) and make up the difference with white sugar or brown sugar.

Pre-heat the oven to 375 degrees.   Mix all of the ingredients for the inside together and pour in to fill the crust.  Bake for 45-50 minutes or until the knife or fork comes out clean. 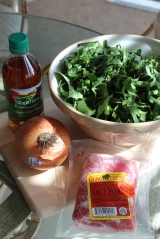 If you’ve never made collard greens, you really should try them. I think with all the crisp cooked and lightly blanched vegetables everyone prefers now, we may have lost sight of the beauty of stewed vegetables. In particular, green beans and very hearty greens like collards, are really great well-cooked until tender and mellow.  Southern cooks often reserve the fat left over after making bacon to be used as cooking fat and as seasoning.

Brown bacon in a large pot. Add onion and garlic and stir. Next add collards, bouillon and water to about halfway up the greens. Cover and simmer for 1-2 hrs.  Season with vinegar, sugar, seasoning, pepper, and chipotle pepper to taste.

Note: A variety of meats work well here: any kind of bacon, salt pork (shown), ham hock, or smoked turkey parts. For a vegetarian version, use smoked salt or smoked paprika to taste.

For this, you can use any cornbread recipe you like, or even a mix. Just spread the batter very thin on a cookie sheet and bake until golden. If you don’t have a favorite, here is a good one:

Preheat oven to 375 and grease a cookie sheet. Mix all ingredients together in a large bowl and blend until just mixed. Spread the batter thinly onto the cookie sheet. There is no need to go all the way to the edges or to make a perfect rectangle. Bake until golden, then cut or break into pieces and serve plain or with butter or honey. 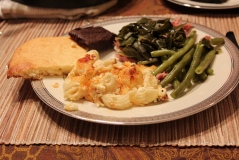 I’ll leave you with the Black Family Reunion Pledge, a moving prayer written specifically for the NCNW by Maya Angelou.

BECAUSE we have forgotten our ancestors,

our children no longer give us honor.

BECAUSE we have lost the path our ancestors cleared

our children cannot find their way.

BECAUSE we have banished the God of our ancestors,

BECAUSE the old wails of our ancestors have faded beyond our hearing,

our children cannot hear us crying.

BECAUSE we have abandoned our wisdom of mothering and fathering,

our befuddled children give birth to children

they neither want nor understand.

BECAUSE we have forgotten how to love, the adversary is within our

gates, an holds us up to the mirror of the world shouting,

Therefore we pledge to bind ourselves to one another, to embrace our

lowliest, to keep company with our loneliest, to educate our illiterate,

to feed our starving, to clothe our ragged, to do all good things,

knowing that we are more than keepers of our brothers and sisters.

We ARE our brothers and sisters.

IN HONOR of those who toiled and implored God with golden tongues,

and in gratitude to the same God who brought us out of hopeless desolation, we

3 thoughts on “To Hattie”